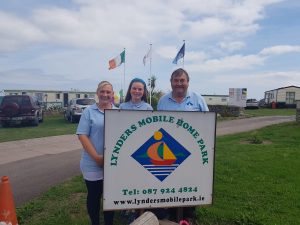 Lynders Mobile Home Park is a family owned business running since 1950. Its one of the best kept secrets of North County Dublin that offers amazing panoramic views of Dublin bay from Rockabill Island to the Sugarloaf mountains, taking in Lambay Island and the Irish Sea.

We have direct access and an 800 metre frontage onto a beautiful beach enclosed in a cove by cliffs with a Martello tower with Rockabill Lighthouse situated to the left. The sea is safe for both swimming and water sports and fishing is also possible.

Relax and enjoy the natural surroundings or go walking along the cliffs or try to undertake the Donabate / Portrane Peninsula Loop Walk. The coastal loop walk is a moderate 12.5 km route that can take approximately 3-4 hours to finish. The walking route paves along the local roads where you can get a real feel for the history and culture in this beautiful village.

Portrane is a small seaside town that merges into the larger town of Donabate. Some of the prominent features include the tower bay were our site is beautifully located, Portrane Demense Castle, known locally as Bob’s Castle and the old style victorian hospital grounds of St.Itas that hosts monuments to George Hampden Evans, a replica of an Irish Round Tower. It has been represented through arts and media throughout the years and its known that members of the band U2 owned a caravan in Portrane where they composed some of the music and lyrics for their 1981 album October. Lead singer Bono and guitarist The Edge were baptised on a beach in Portrane by members of the Shalom religious group. Another rock band, the Delorentos are also Portrane natives. 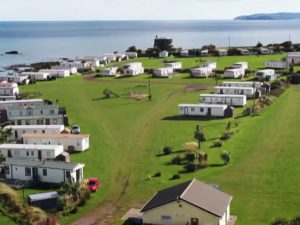 The small seaside town has been used extensively as a location for many films and television shoots. Parts of the Channel 4 television series Father Ted were filmed in Portrane, most notably ‘Funland’ was filmed in Tower Bay only feet away from Lynders Mobile Home Park. It also featured in the BBC series “Murphy’s Law” starring James Nesbitt, ’The Butcher Boy’, Red Rock (first series), Pat Shortts ‘The Belly of The Whale’ and most recently our very own Lynders Mobile Home Park was shown in RTE1 Room To Improve with Dermot Bannon.

As our site is located only 15 minutes from Dublin Airport it is an ideal base for those visiting the local area, Newbridge Park, Swords Castle, Rogerstown Estuary, Lambay Island Tours, Martello Round Tower or the Local Golf Clubs,etc. It also has bus and rail connections for those wanting to go further afield to Malahide, Howth, Dublin City Centre, Ardgillan Castle, Tayto Park, Puddenhill and much more.

Our accommodation is suitable for those wanting to park up in touring pitches, rent mobiles or camp in style while visiting the area for annual events such as the locally held Flavours of Fingal, the very popular Skerries 100 road race or The Bleeding Pig Festival among other events. Our staff are always happy to advise on things to do and will guide you to timetables and connections where possible. Please get in touch with us today and make enjoyable memories at Lynders Mobile Home Park.

We look forward to hearing from you!